April 8, 2022, is National Day of Silence, recognizing the silencing of personal experiences that LGBTQ+ people experience on a regular basis. National Day of Silence started in 1996 as a student-led initiative in Virginia but in recent years has expanded to include the workforce and other places where LGBTQ+ people exist—because we do exist everywhere.

The traditional way of honoring this day is by not speaking. Because it is largely a 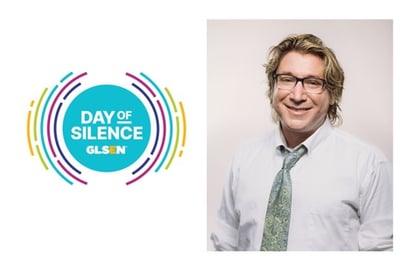 silent protest, 26 years later, many people still do not know about National Day of Silence. Initially, my intent was to make this an article on the background of this day but a recent conversation with a friend, mentor and ally made me realize that writing about the reasons these kinds of days exist might be more effective, so I am daring to share some of my story with you.

National Day of Silence matters to me. My story is not a coming out story as much as an evolutionary process. Not every LGBTQ+ story is the same. When you are LGBTQ+, there are no common stories of origin based on ancestry, no visible characteristics we can see to help us identify who might be like us. Some of us start out alone in our families of origin. By the time I was in first grade I knew that I liked boys before I even had a word to describe it.

When you are LGBTQ+, there are no common stories of origin based on ancestry, no visible characteristics we can see to help us identify who might be like us.

I did, however, know the word “gay.” I learned from a young age that gay was synonymous with fear and something to be despised. I did not understand that the word gay also applied to me. “Gay” was not talked about in any other way than as something negative. By the time I was in sixth grade, I had learned that the word gay applied to me and that meant a core part of my very being was something to be feared and despised. I was not able to focus on the fact that I had a word to describe my relational affections. I had been taught that I was abnormal and abhorrent. I had been taught that I should not exist.

I learned to choose silence in exchange for safety. I learned that one small part of my identity was unsafe to share with others and that meant that I went through a lot of experiences with no support. First dates and serious relationships—no one was there to celebrate with me. First breakups, no one there to support. What I was learning was how to put other people’s comfort in not hearing the truth about who I am ahead of my need to belong and feel like a part of a family or community. I was not sharing the light that I might bring into the world. I did not think I brought any light into the world.

This silence created a void, and that void was deafening. The silence created moments where I looked into my future, and I saw nothing—I did not exist. These were powerfully pivotal moments for me, and I think it’s important to share that I almost did not survive some of these moments. My parents and my sisters, while not fully able to comprehend what was going on with me because I was terrified to tell them, provided the support that I needed in those moments. They were my lifelines, and I am certain that I would not be here today without them.

It took many years for me to even recognize that I had a spark of light to share and many more to find self-acceptance and pride in the fact that I have survived the journey. In fact, this survival is what Pride means to me. I no longer exist in that space of silence, but I see that silence and recognize that it still exists for others. I have lost 23 LGBTQ+ friends and family members to this silence and I feel a sense of protective outrage and a passion for creating spaces where everyone feels welcomed and included.

Our voices and stories connect us and can be sign posts for others along the way. For me, recognizing days such as National Day of Silence becomes a way of honoring the voices and the lives of my friends who can no longer share their stories, a way of honoring my own voice on this journey, and the voices of those who have been or are being silenced. The silence should not exist.

You can learn more about National Day of Silence and get involved through these organizations:

Michael Lyman-Penwell is a Case Manager at ConnectiveRx and Co-Chair of the PROUD@ConnectiveRx Employee Resource Group. He lives in the North Hills of Pittsburgh with his cat, Zachary Binks, and is surrounded by an unending pile of books that are on his “To Read” list.

ELITE 2021 Leader of the Future Kylie Hall of ConnectiveRx