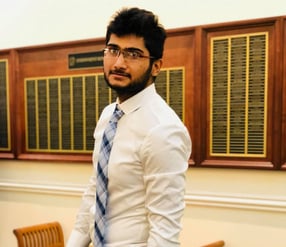 Ashik Gaddampally, Lead Engineer, discusses how he overcame learning new applications from scratch, what challenges he faced in his role, and what helped him build community amongst his peers at CRx.

What’s your role at ConnectiveRx? I was recently promoted to Lead Engineer, Application Development, and before that, I was a Senior Application Developer for Buy & Bill. In simple terms, Buy & Bill is for medical benefit medications where patients go to their doctor’s office to get their prescription or medication fulfilled. Based on the type of medication, the patient can pick up their medication or get it administered (either as an injection or an infusion) through their doctor. So, the doctor’s office buys it and then submits a claim (bill) to the insurer on behalf of the patient, aka Buy & Bill.

My major role is to build and support new applications which can help our processors enroll patients, adjudicate claims for those patients, or enroll new providers into our system. This helps patients get their medications quicker, faster and at an affordable cost.

What’s the biggest change you've experienced while in your role? Learning the systems and technology has been the biggest challenge but also the most exciting. I worked closely with Ralph Staiano (VP, Technical Product Management) and Steve Randall (VP, Systems Development) to understand our data model, learn the requirements, and understand our clients’ needs. We worked together to learn what we had to do, enhance, and migrate. It was a lot of very long hours, but it helped build our understanding of the platform and work towards a common goal together.

Over time, like most things, it became easier because I knew the system after the first three months, and I learned what can be done or cannot be done.

What keeps you inspired in your role at CRx? One of the things that keeps me motivated in this role is the fact I get to learn something new from a lot of different people and I learn a lot of different roles and responsibilities. One major thing I have learned from this role is Amazon Web Services (AWS), which I have never worked on before. That was very challenging because it was something new for me to learn. Luckily, my team was supportive. It's not like “oh, you have to do this right then and there.” But that was the huge thing I learned from scratch in this company that I really appreciate. I’m appreciative of ConnectiveRx because they gave me time to learn something new.

I also really love the way we work here. While working with Ralph Staiano and Steve Randall, whenever I needed to explain something to them or ask them something, I never got intimidated by their titles because of their open and approachable personalities. Same with Haresh Pathak (Sr. Manager, Product Management), who has been my mentor since day one. They have all taught me to have patience and be supportive. That's the thing I like best about this environment, so that's why I wanted to stick with this, and I have been sticking to this program for a long time.

How have you built a community with your colleagues at CRx? Before the pandemic, it was literally going up to Teammates desks to request information and communicate. Since I started, I had grouped together a couple of resources to find information from certain people. But again, everybody was in the office physically and we never had any issues with contacting people, just stopping by their desks.

Because I was able to build good personal relationships with everyone that I work with, I was able to better communicate during the pandemic when we weren’t physically all together and that helped us stay productive. That being said, being back in the office together is so great because we can collaborate way more effectively and be more productive with our time.

Do you feel like it'll get easier over time as you guys return to the office more often? Yep. For me personally, I do see a lot of people coming into the office now and it’s increasing every week. It’s been so good for our communication.

When you’re not working, what are we most likely to find you doing? I love going to the gym. If I'm not in office, I am at least spending two or three hours in the gym straight. It's kind of a stress buster for me, and I really like working out. I do a two day and one day pattern. That means two workouts a day in one week and one workout a day in the next week. I just try to shuffle between those and try to do heavy weights and low reps. My favorite muscles to work out are Lats and Chests, and leg day is my least favorite!

The Power of Adaptability

Connected Together Profile: Making An Impact On Others